Aero Vintage Ltd was formed in 1982 by Guy Black, an experienced design engineer, following his wish to assemble a small but high-quality collection of ex-military pre-1945 aircraft with the idea of displaying them in air shows and films. At that time, restoring old aircraft was much in its infancy and little in the way of airframes and restoration facilities appeared to be available.

The collection started out with the construction of a pair of replica Sopwith Pups done to an exacting standard of accuracy complete with original Le Rhône rotary engine, instruments and Vickers gun. A stupid error by a well-known test pilot destroyed one on its first flight and the other was sold to the Fleet Air Arm Museum, but the hunt for an original 1st WW aircraft turned up a derelict Bristol Fighter - a huge challenge to restore.

It seemed a theme to this aircraft collection was developing, and the common denominator then was Rolls-Royce engines. So, starting with the Bristol Fighter (Rolls Royce V12 Falcon), Spitfire Mk. IX, TE 566, Rolls-(Royce Merlin V12), and the Hawker biplanes - all with V12 Rolls-Royce Kestrel engines followed.

Aero Vintage Ltd. originally sub-contracted the restoration of all its aircraft but the fledgling company found the management of this challenging, as the industry had, in the main, not then matured sufficiently to produce the demanding standards the company required and so Retrotec Ltd was formed to undertake this role, assembled around a core team of manufacturing engineers that Guy had previously worked with and trusted.

Under the guidance of Aero Vintage Ltd, apart from the conventional airworthiness management, Retrotec was one of the first aircraft restoration companies to establish a full-time engineering inspection department, as is found in all traditional aircraft constructors. Guy recognised that aircraft restoration today was more about manufacturing than in-depth maintenance a policy then steeped in tradition with the CAA. 100% engineering inspection is thus mandatory at Retrotec, whether it be original items to be refurbished, incoming material, bought in parts or, of course, manufactured items made within the company. As a result of this policy, problems of incorrectly made or unsuitable parts that would delay the progress of the restoration work are almost unknown. Retrotec has full CAA accreditation, with A8-20 approval granted on 31st May 2006 which was elevated in 2017 to A8-21 (manufacturing of all aircraft parts and engine components) and A8-25 (maintenance) together with design authorisations - Retrotec being one of only a handful of companies that have the same level of approvals.

Following Aero Vintage's discoveries of rare and often unique-surviving aircraft, Retrotec has had to rescue equally hard-to-find machinery often from scrap yards and revive long obsolete engineering manufacturing techniques. For example, for the Hawker biplanes and the Hawker Hurricane they installed purpose-built machinery to manufacture rolled spar sections from high tensile steel strip, which was a common manufacturing technique in the evolution of aviation in the 1930s. Having acquired original tube-shaping tooling from Accles & Pollack, they are also able to produce streamline shaped tubing, obscure oblong or oval sections, and also rectangular and square sections in short runs or as required.

The latest production equipment installed enables Retrotec to manufacture streamline wires, drawn wire section, odd sized tubing and tie rods plus many other productionised parts. It is no boast to say that there would be very few Hurricanes flying without the production of Retrotec's spars and even the smallest of items, tubular rivets.

Retrotec soon began to be noticed and a growing number of businesses both in the historic aircraft world and other diverse industries, from defence to motorsport and other commercial contracts now outweigh work commissioned by Aero Vintage and Historic Aircraft Collection.

The pinnacle of accolades was given to Retrotec in 2018 when The People's Mosquito chose the company as its contractor to construct a Mosquito FB VI. Aero Vintage is now in the course of constructing a 20,000 ft purpose-designed facility nearby to the company's management offices. This site was acquired some years previously to accommodate the growing engineering facilities and it is anticipated the new works will be ready during 2019.

As Aero Vintage's aircraft started taking to the air, it seemed a logical step to start a separate company to manage the flying side, and so Historic Aircraft Collection Ltd was formed with a friend of many years, Angus Spencer-Nairn, who shared the burden of the growing collection and also learned to fly, so in time both directors had soloed on their Spitfire Mk. V. Janice, Guy's wife had taken on the role of organising the air-displays and film contracts - and has the unenviable task of curbing Guy's insatiable appetite for more and more projects. Overtime, with some disposals taking place to refine the collection, now one of the pre-eminent collections of aircraft in Europe became established, with its operating base at the Imperial War Museum, Duxford, where the company works in close co-operation with the IWM.

In the early 2000s, a new venture was undertaken. Following the acquisition of many tons of Air Ministry boxed spare parts including electrical, instrument, hydraulic and pneumatic, Aero Vintage Spares was formed providing a retail outlet for hard to get spare parts for ex-military British aircraft up the late 1950s. 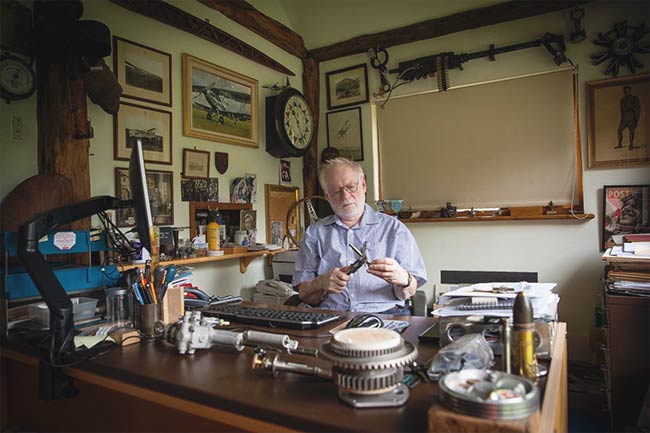 Guy Black is the founder and engineering director of Aero Vintage Ltd. His passion for engineering originated from metalwork classes at Rye Grammar School; shortly after this, Guy took a Saturday morning job with Weslake & Company, a local business based in Rye, East Sussex that had a prestigious reputation in high speed engine research. Mentored by its founder, Harry Weslake and following an OND course in engineering, Guy accepted an apprenticeship with Weslakes, starting in the design office. Later, the company encouraged him to pursue further academic education in engineering. Guy's enthusiastic 'can do' and 'hands on' style led to him working in all departments at Weslake to expand his engineering knowledge and skills. During this time he was involved in numerous engine development and design projects ranging from racing motorcycle engines to the V12 F1 engine for Dan Gurney as well various road car projects for leading car manufacturers.

Inevitably, the motor sport environment of Weslakes inspired Guy to further his own motor sport ambitions, commencing with motorcycle racing and then to cars for speed trials and hill climbing. The success of his cars,

Lynx was not just limited to engine tuning, but suspension and gearboxes as well. Lynx also commenced restoring Jaguar C and D types, rebuilt to the exacting standards that Guy had learned at Weslakes. The success of these cars resulted in numerous Jaguar owners commissioning Lynx Engineering to prepare cars for competition use. This was soon followed by the construction of road-going replicas of the D and C type Jaguars based on E Type components. The company quickly attained a reputation for being world leaders in their field, a position they held for several decades, where major development projects were undertaken including soft top and estate conversions on road-going cars of varying makes.

One of the first projects was the restoration of two Spitfires that were outsourced to an embryonic restoration businesses. Guy was soon to become disappointed with the quality of work which fell short of his exacting standards; a criteria that he insisted upon in all projects he undertook. Before long, to overcome this issue, Retrotec Ltd was formed as a sister company so that the work could be undertaken in-house.

In 1997, Historic Aircraft Collection Ltd (HAC) was formed with a friend, Angus Spencer-Nairn, to provide an operational platform for some of the vintage aircraft that Guy had restored, to exploit their potential in films and airshow work. Currently HAC's flying collection consists of a Hawker Nimrod II, Hawker Fury, Hawker Hurricane II and a Spitfire Vb. The Airco DH9 WW1 bomber is the latest aircraft to be restored by Guy and its maiden flight should take place in the later part of 2018. A number of further unique and exciting aircraft await their place in the queue.

In 1960, Guy won a bronze medal for winning a boxing contest, where he punched the school bully on his nose, whereby the blooded-boy fled the ring, crying. Much later, Guy won the Historic Aircraft Association's prestigious award, the Darrell Stinton Trophy, for his personal contribution to the aircraft preservation world. Retrotec has also won numerous awards for their restoration work.

Despite the extensive demands upon his time from his engineering businesses, Guy, who always enjoys a challenge, is a highly respected engineer whose skills as a consultant are frequently sought by individuals as well as recognised manufacturers and businesses in specialised automotive, military and aviation fields, where engineering investigations, protype design and production challenges exist - and in his spare time, still searches the world for more undiscovered treasures. 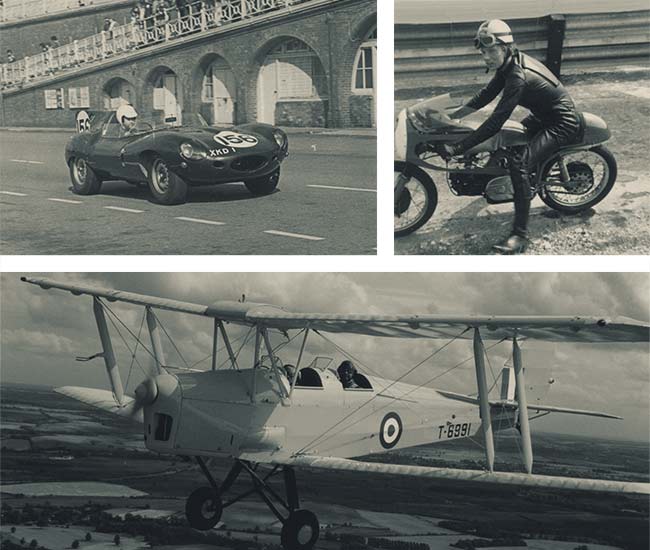